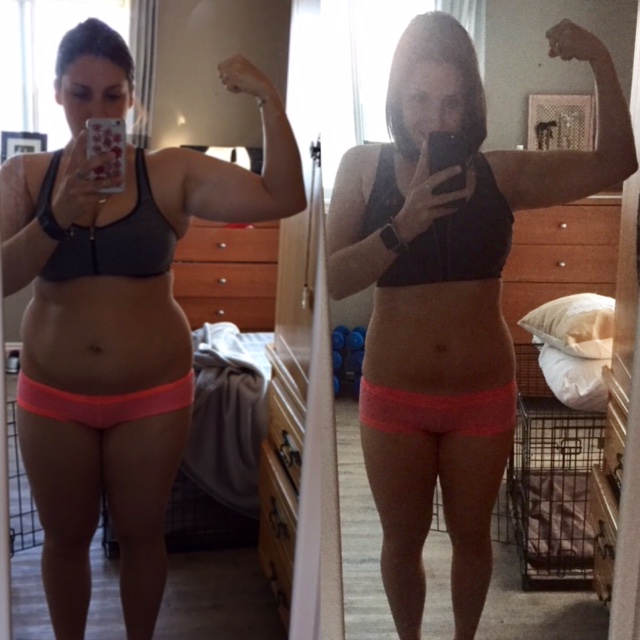 Sometimes, we can find our lives taking us in different directions than we expected. A small shift can make a huge difference to our lifestyle or to our mindset.

These two ladies found the routine of the BBG helped them to become more confident in themselves and so much happier! Read their transformations:

Sam was a competitive dancer growing up, so she was always active and very strong. Before graduating high school, Sam injured her knee badly. After years of striving to be a professional dancer, Sam was facing a complete change in the direction of her career.

After moving away to go to university, still dealing with a knee injury and a new lifestyle, Sam explains that she began to gain weight. She was no longer as active as she had been and struggled a little with motivation.

Once Sam finished uni, she moved across the country. “Although I exercised periodically, this is when my health took a turn for the worse. I was struggling with some mental illness and was eating very unhealthy food; I wound up gaining nearly 40lbs. Being a ballerina, I have also always struggled with body image. I have gone through phases of being very physically active, but it was usually coupled with intense calorie restrictions and was followed by letting everything go and not exercising at all.” Sam desperately wanted to change her lifestyle and to treat her body with more love.

Sam couldn’t believe how unhealthy she had become, a total change from the healthy lifestyle she had lived as a teenager. While she’d tried things on and off to lose the extra weight, it finally became too much. “One day I decided I had had enough. I was done treating myself poorly and was ready to commit.” In May 2016, Sam began my BBG program.

Sam followed my BBG guide and HELP nutrition guide religiously to begin with, learning how to plan her workouts and eat to fuel her body. She began to notice a difference in her self-confidence first, and soon felt mentally stronger than she had been in a long time. “Sure, all my clothes fit better, but the big thing is that I actually WANT to wear my clothes, dress up and go out. Doing BBG has enhanced my self-esteem, my body confidence and my overall wellbeing.”

As Sam explains, she has learned a lot from the HELP guide, and has developed a healthier relationship with food. While she isn’t following every meal in the plan, Sam has learned how to prepare healthy, filling meals to fuel her to reach her goals. “When I started BBG I was around 188lbs, now I fluctuate between 158-162lbs. That said, my measurements and how I feel are more important than the scale to me.”

Sam has also learned the importance of focusing on how she FEELS. She doesn’t rely on the scale, instead she focuses on feeling good inside and out! Amazing transformation Sam, you’ve learned so much and it’s amazing to hear you put that into practice everyday!

Jolien explains that when she was 15, she had an unhealthy fixation on her weight. She became dependant on the number on the scales for her happiness, and lost a lot of weight in the process. “I refused to admit that I had an eating disorder, but my family of course noticed that I wasn’t in a healthy state.”

When she turned 17, Jolien discovered BBG and many transformation stories. “The transformations of people that have had an eating disorder gave me hope.” Jolien started following the BBG workouts and within a few weeks, she began to notice a difference in her body and began to feel more confident too.

After doing 12 weeks of BBG, Jolien spent a year in Ecuador as part of an exchange program. Not wanting to lose the progress that she had already made, Jolien restarted BBG and began following my HELP nutrition guide. With each week, Jolien saw her muscle definition improve. She felt energised and learned how important it is to fuel your body with nutritious foods.

“Since this time, I got happy again and my relationship with food is positive now.” Thanks to BBG, Jolien has also found a new passion for fitness. She wants to help motivate other people who are dealing with an eating disorder to make healthy choices too.

Jolien’s story is so inspiring, she has had a massive transformation when it comes to her frame of mind. I’m so happy that she has learned how to care for her body and her mind. Well done Jolien xx