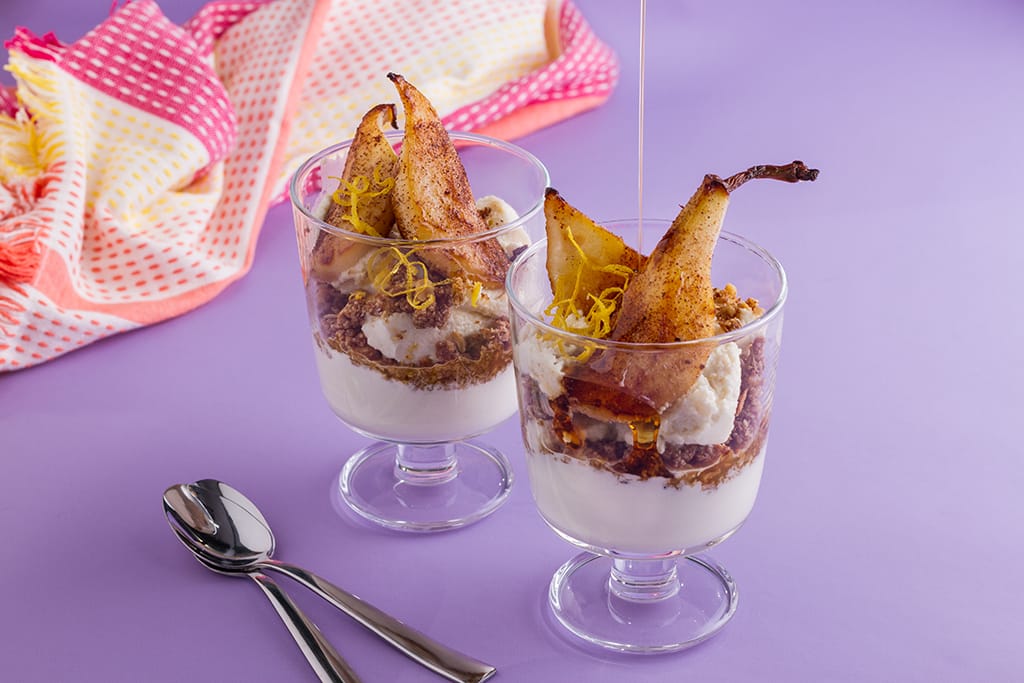 Cinnamon pears by themselves make a fantastic healthy dessert idea but this recipe is seriously next level!

Grilling the pear really brings out the flavour — when it is softened and you combine it with crumble and an almond ricotta, it tastes incredible.

You can use almost any pear variety to make this dish. I love to use pears that have been ripe for a day or two — that way they are deliciously sweet.

This parfait looks so decadent and impressive, make sure you snap a pic of it!

To make the crumble:
1. Place 30g rolled oats, 30g walnuts, ¼ tsp cinnamon and the coconut sugar in a food processor. Pulse for 15-30 seconds or until it is finely ground.

2. Heat the coconut oil in a non-stick fry pan over medium-high heat. Add the remaining rolled oats and walnuts and cook for 1-2 minutes or until lightly toasted, stirring frequently.

3. Add the ground oat mixture and stir to combine. Cook for a further 2-3 minutes, or until lightly toasted and the sugar starts to melt.

4. Remove from the heat and stir in the vanilla and honey. Set aside to cool in the fry pan, stirring occasionally as it cools.

To make the almond ricotta:

5. Place the drained almonds, lemon juice, maple syrup and one teaspoon of water in a food processor and process until smooth.

6. Transfer the mixture to a bowl and stir in the lemon zest and ricotta. Cover with plastic film and refrigerate until ready to use.

To make the coconut yoghurt:

7. Place the yoghurt and desiccated coconut in a small bowl and mix until well-combined. Cover with plastic film and refrigerate until ready to use.

To prepare and cook the pear:

8. Peel the pear then cut into quarters and remove the core and seeds.

9. Heat the oil in a non-stick fry pan over medium-high heat. Add the pear and cook for 3-5 minutes on each side or until the pieces begin to brown. Remove from the pan and dust with cinnamon.

To serve the parfait:

10. Place the coconut yoghurt in the bottom of two serving glasses and layer with half of the crumble and almond ricotta. Place in the refrigerator to chill for 10 minutes. Top with the pears, remaining crumble and drizzle with maple syrup, if desired. Enjoy!